So I was hanging out in the front yard with the kids – Emmeline was playing in the dirt and Min was riding his bike when a familiar troopy pulled up. It was a friend of ours, Reuben. I’ve mentioned him before; he’s taken us out to different places, to the Seven Sisters Dreaming place – he’s a huge source of knowledge up here. He’s been out of community for a while now – it was good to see him. Comforting even. Matt gets home from work just as he pulls up. “I won’t shake your hand big man, I might get you dirty!” He says with a grin. Matt has started wearing longer pants and shirts because it’s been cold in the morning. “You look like such a white man!” I’m killing myself trying not to laugh. “So I got this awning to put on the car, have you got a drill?” He asks. “Now?” “Yeah!” So three hours later Matt comes in having just attached an awning to Reuben’s troopy. “It’s Basso’s birthday tomorrow…” Reuben says. “You want me to bake a cake?” “Yeah”. I’ve made a couple of birthday cakes up here; like I’ve said before, things we take for granted, like working ovens, the ability to read English recipes, to afford ingredients. Anangu don’t necesarrily have access to those things. I don’t mind at all. Reuben’s wife gave me a packet mix and I popped a cake in the oven. “What you doing tomorrow? We going to Pip for football and we’ll take you to the underground caves!”. I gotta admit, I was looking forward to doing not much of anything, but we have to take advantage of every opportunity like this, so the following day we set out for the 3 hour drive to Piplitjatjara, a community on the western side of the APY. We travelled in convoy, and stopped at a secluded patch of bush. I wondered where this underground cave was… Then I saw it. A tiny hole in the ground. Surely he didn’t expect me to go down there?! I wouldn’t fit!!! As I got closer I saw that it sloped down somewhat and looked like it would be bigger inside. Judy looked at me: “you’ll be right!” I gently suggested Matt go first because he had the white-man head-torch strapped to his forehead. I on the other hand had my Anangu reputation to uphold and had to look like the brave black woman who didn’t think twice about squeezing down a tiny hole in the ground to god only knows what horror beneath. Matt and Min went down, so there was nothing left but to give it a crack. I was more worried about how the hell I was going to get out without a crane and a mob of SES volunteers( it was a pretty steep drop! I scraped my arms down and it did indeed open up into this large cavern, easily accommodating 4 adults and Min. It was amazing! The floor was littered with what I can only assume was fossilised scat, it was light but rock-like. There was translucent rocks and minerals – I reckon the miners would be sniffing around given half the chance. We sat down there in true darkness for a period of time. It was silent, the air was thick with damp, dusty rock. It was pretty amazing.

Now came the hard bit, getting out! I climbed back to the entrance, took of my beloved havvies because they were just making things harder. In retrospect closed shoes would have been more responsible; but there was something really connected about navigating this cave system in bare feet. I found a couple of footholds and somehow managed to squeeze myself back out. Phew! No SES needed! Then we hopped back in the car and headed towards Pip! 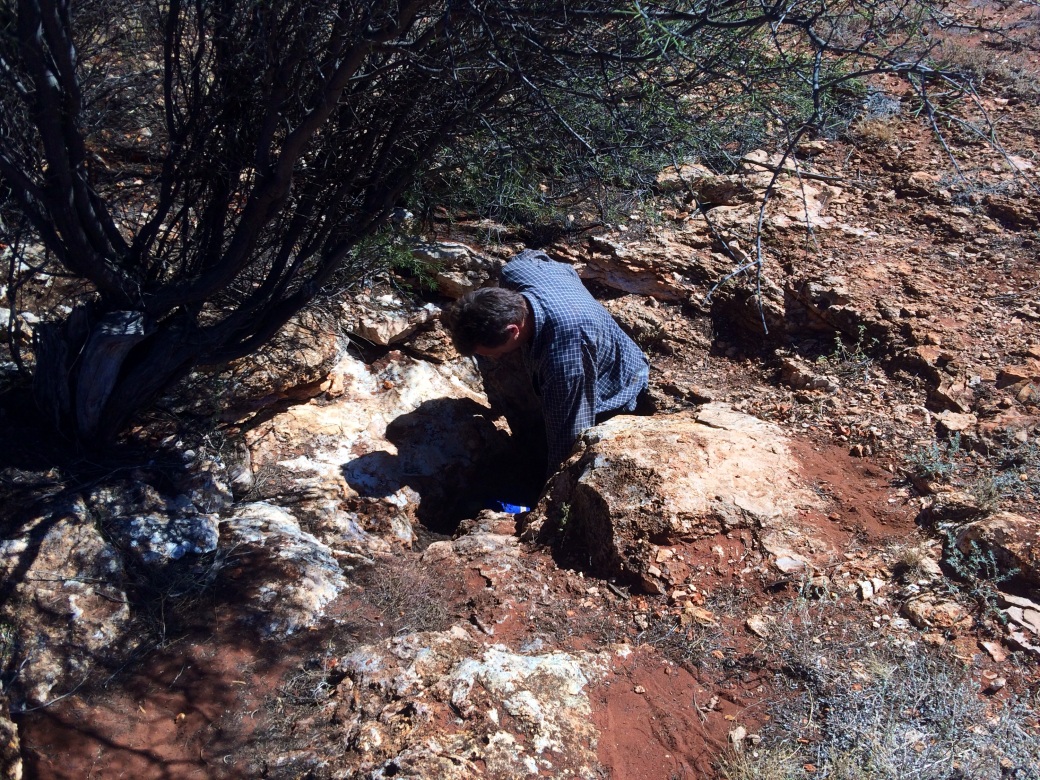 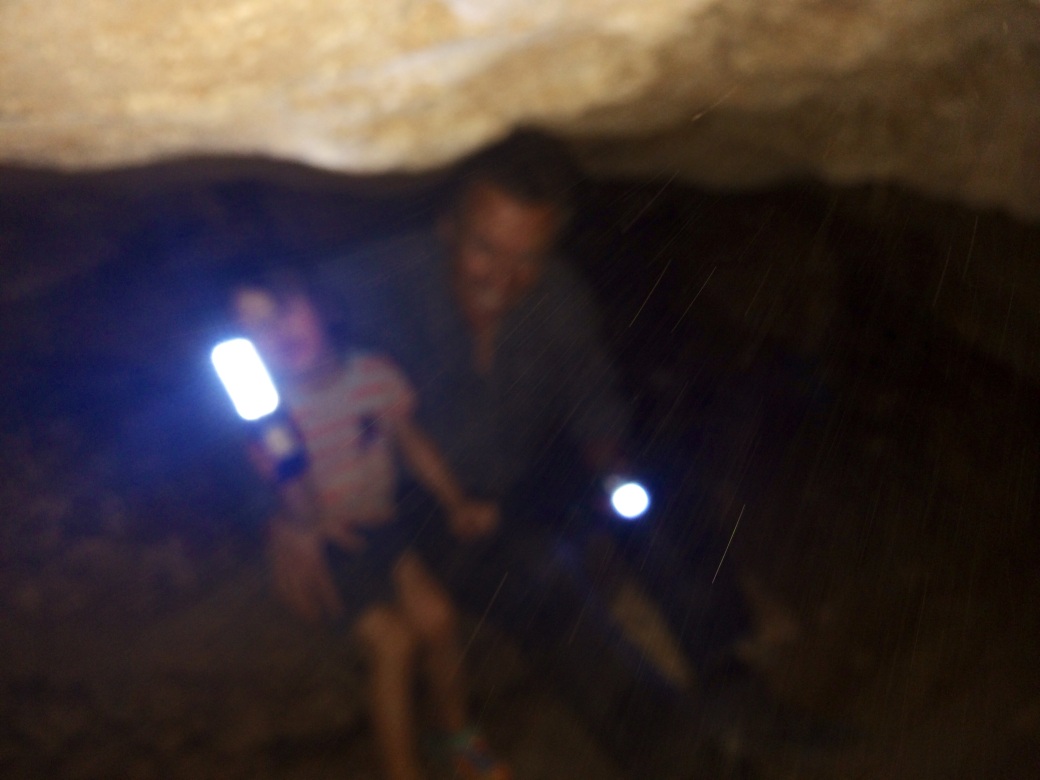 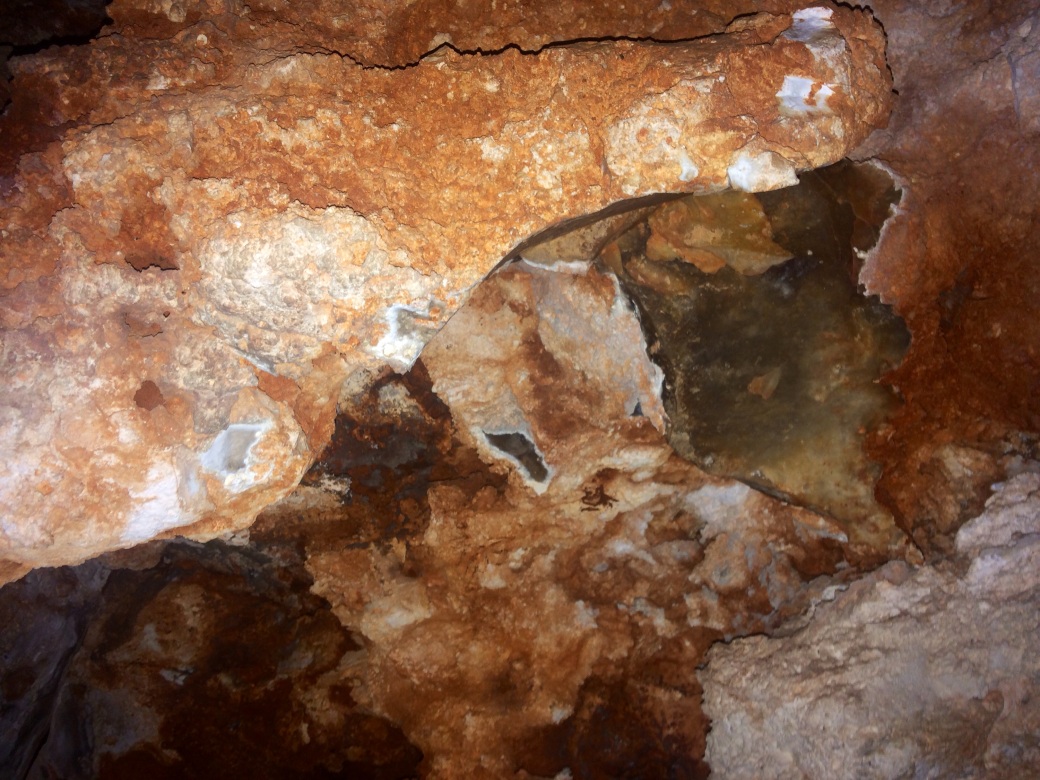 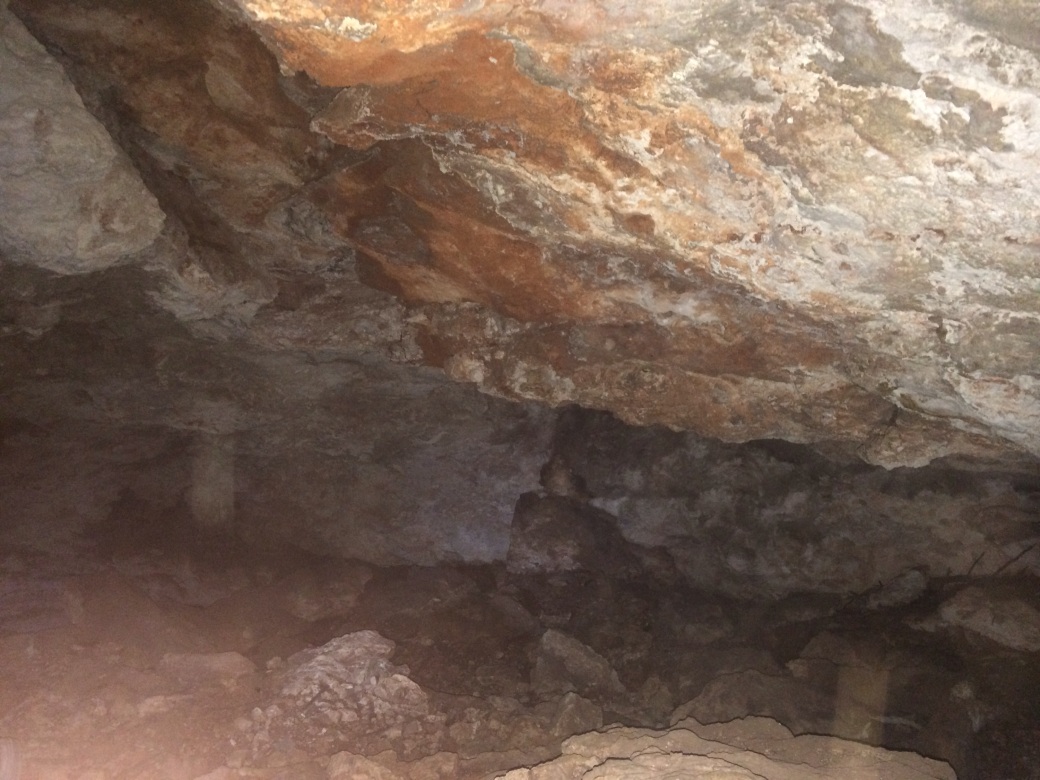 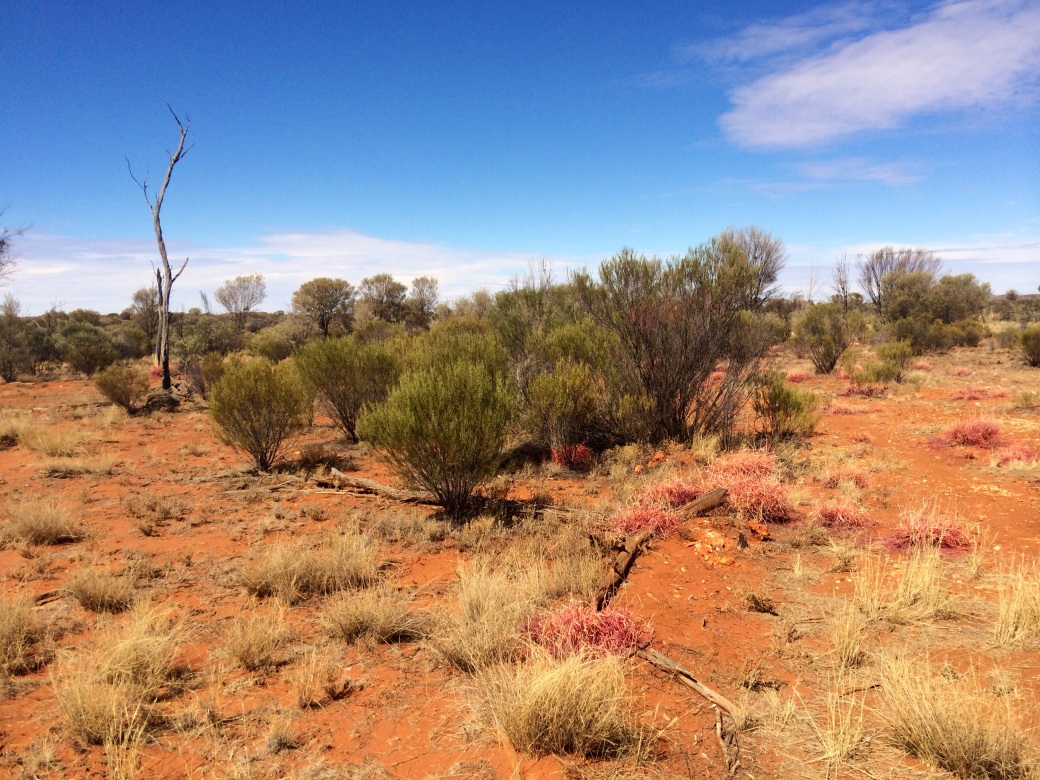 Half of Pip and Amata were gathered at the oval at Kalka, just near Pip. This “oval” was all red sand. I didn’t want to think about the gravel rash from blokes slipping over! To say that these guys take football pretty seriously is a grave understatement. It’s almost a part of Anangu Culture. Matt, who secretly was probably hoping that Amata was short so he’d get a guernsey (I’m pretty sure I saw him doing a head-count at one point), got roped into doing the timing, scoring and the siren (a car horn). He made it seem like he was reluctant but I know deep down he loved being a part of it. It was pretty amazing; people gathered around the oval, lots of fires and the smell of Malu Wipu cooking permiating the air. Kids playing, dogs running around, even the service providers, the Police, Teachers and  Nurses came out to watch. It had a real community feel to it. I’m really glad we went, even though it was a long day and we got home in darkness. Matt, the kids and I were knackered, but we sat up yarning to Reuben untill late into the night. Every time he visits, I learn so much more about Anangu way. And that’s why we are here, after all. 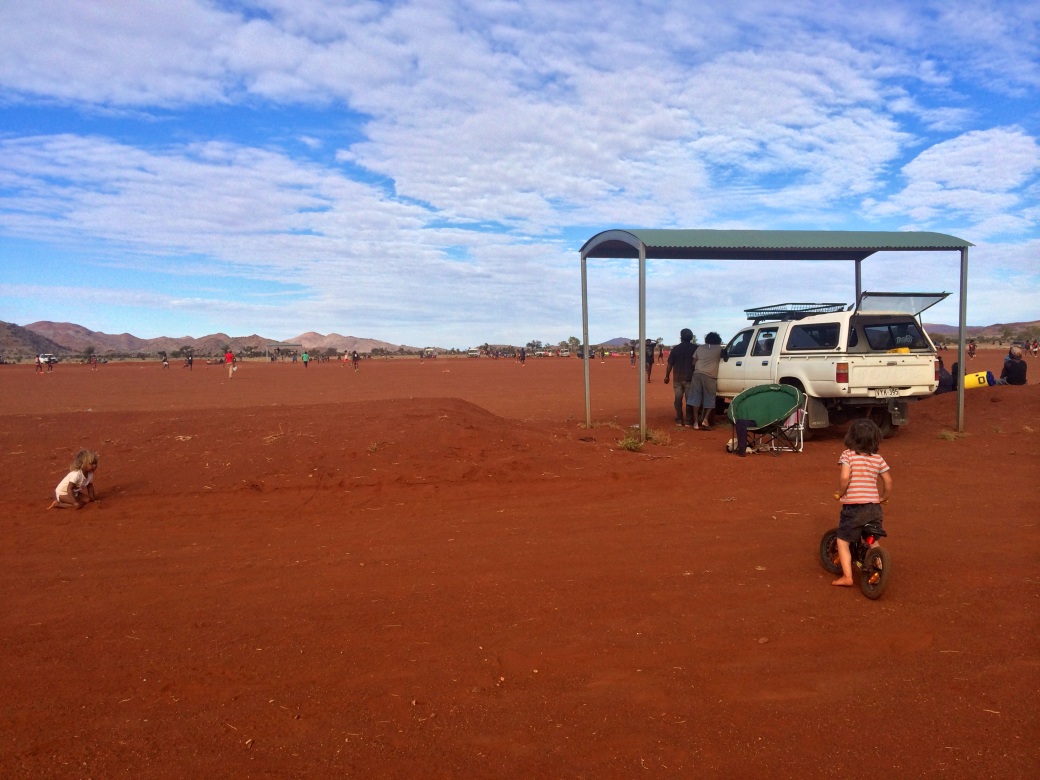 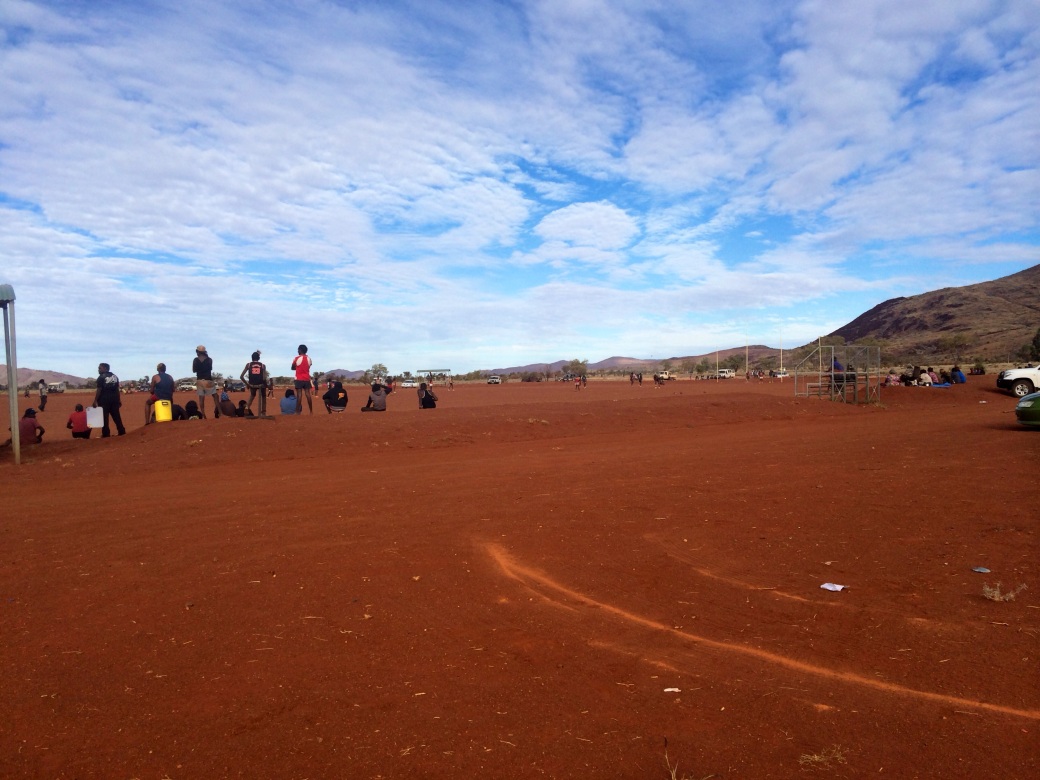 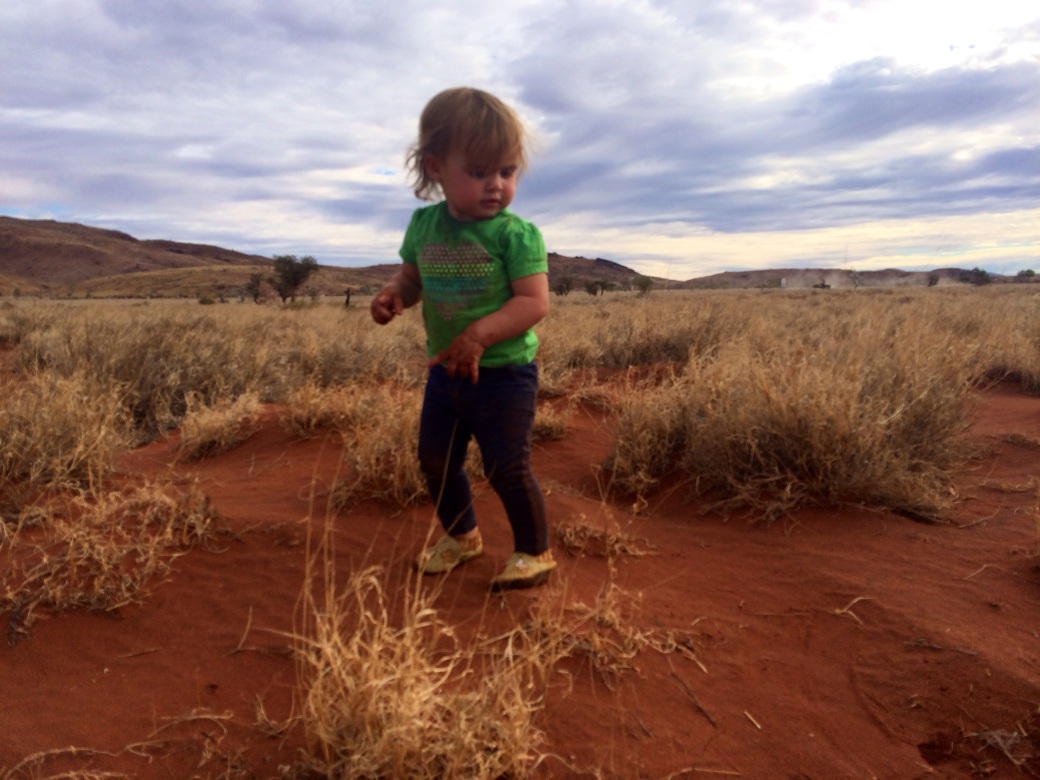 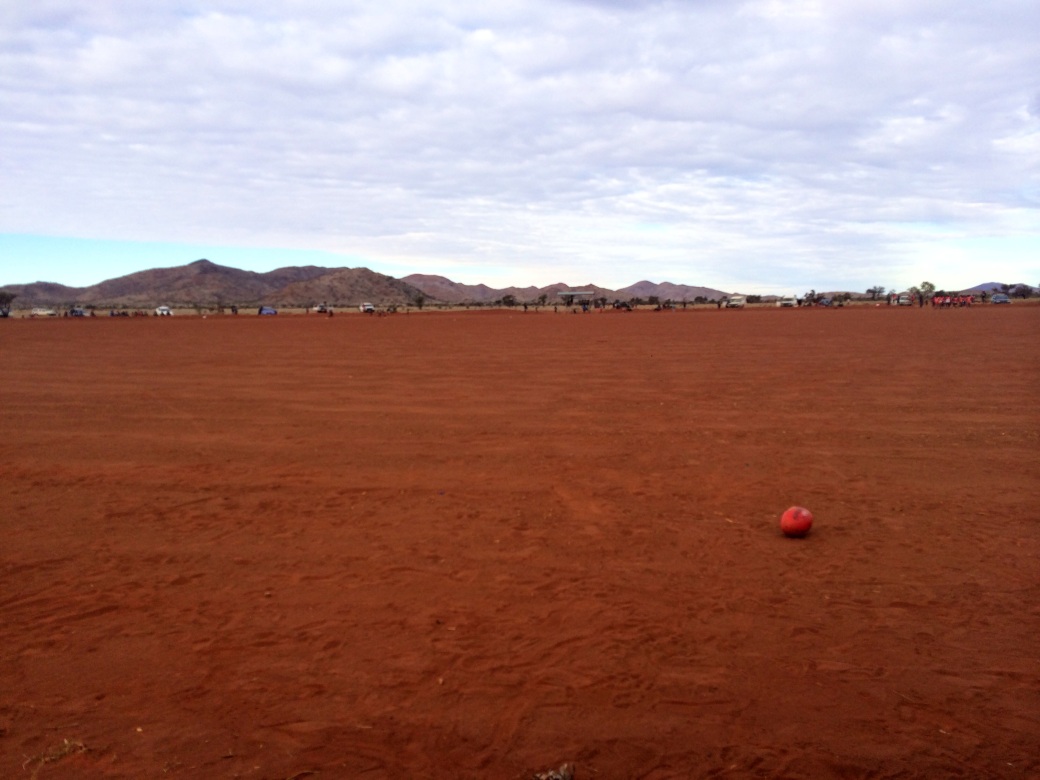 One thought on “Amata VS Pip”